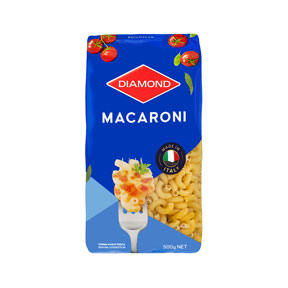 Bring the milk with the bay leaves to the boil. Remove from the heat and leave to infuse.

Peel the onion and chop finely. Crush, peel and chop the garlic. Derind the bacon and cut into 1 centimetre pieces. Melt the butter in a saucepan. Cook the bacon, onion and garlic until lightly golden. Mix in the flour and cook until frothy. Remove the bay leaves from the milk. Gradually add the milk to the flour mixture, stirring to remove any lumps before more milk is added. Cook, stirring until the mixture boils and thickens. Mix in the oregano, parsley, spinach, tasty cheese and drained macaroni. Mix until well combined.

Spoon into a 6 cup capacity ovenproof dish. Sprinkle topping over. Bake at 200 degrees c for 10 – 15 minutes or until heated through and the topping is golden. If the mixture is hot when you put it into the dish, grill until golden without reheating.